This spring, I will the “Using Twitter Data in Social Science” course another spin. The course introduces students to the work with digital trace data in the social sciences. The course builds on a tutorial on the work with Twitter data that Pascal Jürgens and I published last year.

The course is designed for students without prior training in programming or exmploratory data analysis. Still, by the end of course students are expected to independently perform theory-driven data collections on the microblogging-service Twitter and use these data in the context of a series of specified prototypical analyses. So make sure to take the time over the course of the semester to get acquainted with Python, R, and potentially SQL. 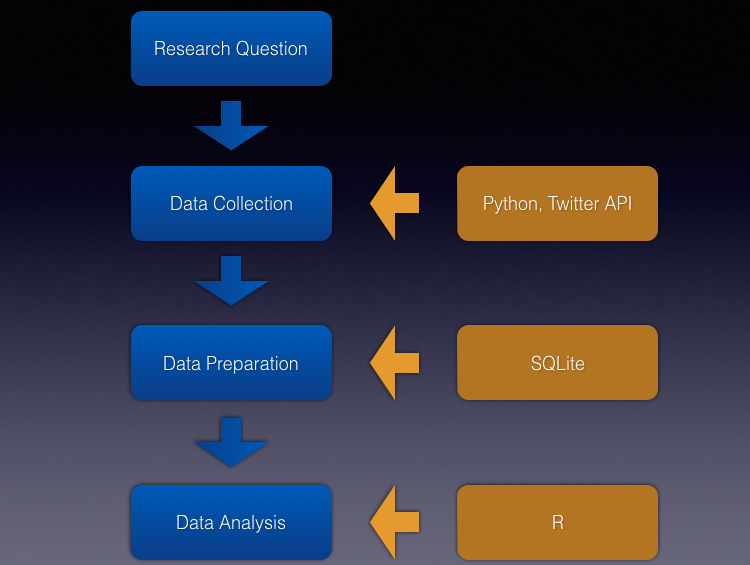 We will start the course by focusing on conceptual issues associated with the work with digital trace data. Students will then learn to use fundamental practices in the use of the programming language Python. Following this, we will collect data from Twitter’s APIs through a set of example scripts written in Python. After downloading data from Twitter through Python, we will load these data into a SQLite database for ease of access and flexibility in data processing tasks. Finally, we will discuss a series of typical analytical procedures with Twitter-data. Here, we will focus on counting entities and establishing their relative prominence, time series analysis, and basic approaches to network analysis. For these analyses, we will predominantly rely on R.

The course itself follows closely the outline provide by Pascal’s and mine paper A Tutorial for Using Twitter Data in the Social Sciences: Data Collection, Preparation, and Analysis. Students will be introduced to the work with Twitter-data through a set of example scripts developed in the context of the tutorial and available on GitHub.

Here is the course’s syllabus.

You can find detailed information on the content of the sessions, background readings, slides, and example code at the dedicated posts per session:

In addition to the tutorial a series of texts are encouraged background readings: