The growing use of Twitter during election and issue campaigns by politicians, campaigners and the public alike has led to an ever increasing body of research on this topic. While a majority of studies focuses on political uses of Twitter in the USA, there is an ever growing literature on political uses of Twitter in other countries. Still, there remain challenges. Researchers from many different fields are addressing questions related to Twitter’s role in politics–such as political scientists, communication scholars or computer scientists. These researchers approach the topic from different perspectives with widely divergent methods and publish their results in venues of their various fields. This leads to a fragmentation of the field, with studies seldom addressing most of the available evidence. As of now, there is no coherent account of the existing literature. Such an account would enable researchers to develop hypotheses for their research based on empirical findings of past research. In the working paper Twitter in Politics: A Comprehensive Literature Review, I present an attempt at such an account. I will briefly present a large selection of studies addressing the use of Twitter by politicians, various publics during election and issue campaigns and reactions on Twitter by various actors to big mediated campaign events–such as televised candidate debates, party conventions or election day coverage.

While an ever increasing number of studies addresses the role of Twitter in politics, this research is fragmented and, more often than not, only partially connected to available research on the same topic. This could be because the research area is rather new. So, as of now, there has not yet emerged a common canon of studies, identified as relevant by the community of researchers working on the topic. Also, scholars have spent little effort in systematically identifying common empirical patterns in various studies addressing the topic and thereby not provided the field with a list of phenomena and patterns that are to be expected when researching this topic. Another reason could be the diversity of the field. Researchers from many different scientific fields are working on the role of Twitter in politics. Political scientists, communication scholars and computer scientists have published on this topic. These publications come from different theoretical perspectives, use different methods and–probably most importantly–are published in different venues. These differences make it difficult for researchers to productively engage with relevant work in their area of interest stemming from other scientific backgrounds. This leads to a rich but only loosely interconnected body of evidence on the use of Twitter in politics. With this literature review, I wish to address this problem and to offer an account of the common findings and divergent evidence that can be found on the role of Twitter in politics if one pools the available research.

In this literature review, I tried to include as many studies as possible that provided some empirical evidence on the use of Twitter in politics. In the selection of the studies, I consciously aimed to include all available studies that contained some empirical evidence on the topics of interest. In doing this, I did not just focus on studies published in scholarly journals, conference proceedings and books but also included–if available–unpublished manuscripts of conference talks or working papers. This increased the evidence available to be presented here. As this is a rather new research field, I thought it more beneficial for the goals of the study to include as much empirical evidence as possible without restricting myself to scholarly vetted publications.

I will present studies included in this review with regard to their research questions, their research design, their mode of data collection, data selection and findings. I did not critique the studies included, be it with regard to their data collection, analytical approaches or the interpretation of their findings. Instead, my aim was to compile a collection of empirical evidence that might allow for the detection of patterns common across different studies and interesting observations, that were only evident in specific cases.

While the selection criteria for the inclusion of studies in this review were rather broad with regard to the form of publication, I purposefully restricted the studies based on the topics addressed by them. I only included studies that directly or indirectly spoke to the use of Twitter by politicians and campaigns, the use of Twitter by publics during election or issue campaigns and the use of Twitter by various users to comment on mediated campaign events–such as televised candidate debates, party conventions or election day coverage.

I discussed the studies included in the review based on common features–be it the theoretical discourses addressed by them, the chosen research designs, approaches to data collection and selection on Twitter or their research questions. Table 1 shows the categories and subcategories that I used to group the studies. For each of this categories I presented a short discussion in which I emphasise common elements, divergent evidence and challenges for further research. 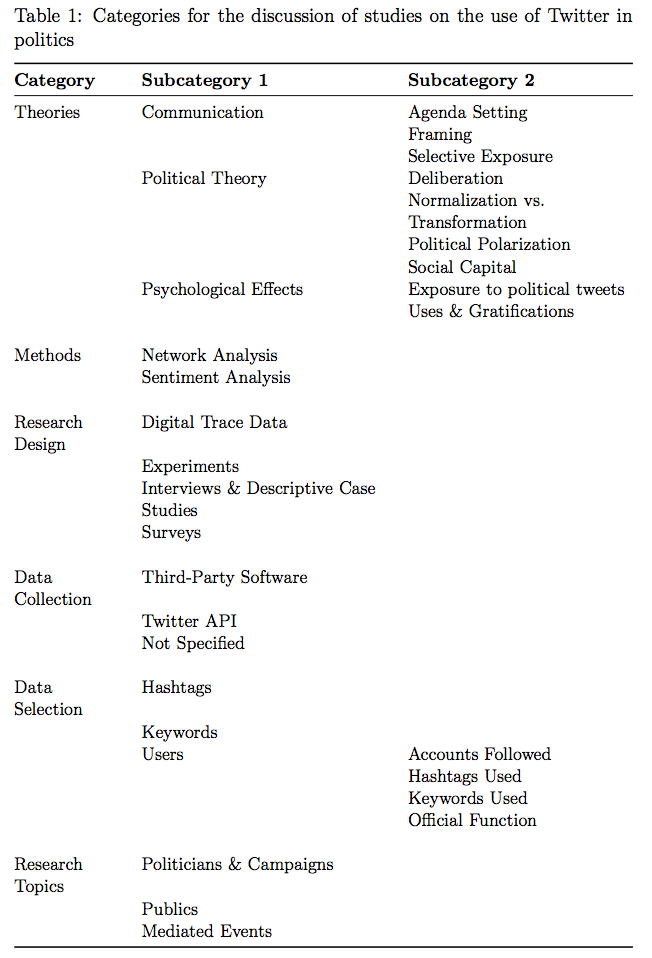 I hope this literature review stands at the beginning of a more systematic approach to the discussion of uses of Twitter in politics. Please let me know what you think.