With Pascal Jürgens [@pascal], and Harald Schoen I wrote a short blogpost for “Politik nach Zahlen“, a blog focused on empirical research on elections, hosted by the German newspaper Die Zeit. This time we focused on two results from the study Pascal and I did on the usage data of the German e-petition system. In Auf der Jagd nach den 50.000 Klicks: E-Petitionen in Deutschland we showed the development of co-signatures over time.

Jungherr, Jürgens (2010) The Political Click: Figure 1 Signatures per day across all petitions

We also introduced the concept of the co-signature overspill. We found that the daily number of co-signatures of e-petitions below a total of 10.000 co-signatures rose when highly successful e-petitions were active. This is shown by the development of the black area in the graph above. 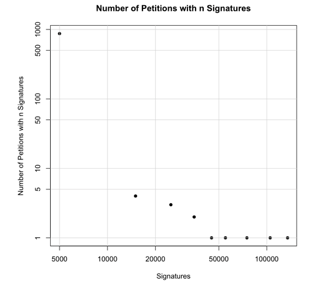 Jungherr, Jürgens (2010) The Political Click: Figure 3 Number of co-signatures per petition collected in steps of 10,000 co-signatures

Also we showed that only a very small number of e-petitions collected most of the co-signatures on the e-petition platform.

These and other results of our analysis can be found in Andreas Jungherr and Pascal Jürgens (2010) “The political click: political participation through e-petitions in Germany”, Policy & Internet, 2(4) Article 6.