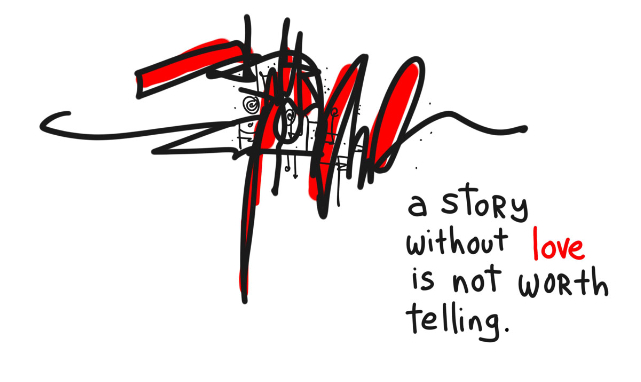 And so this story goes:

This morning I found the gapingvoid daily cartoon #7 (The new incarnation of Hugh MacLeod‘s Crazy Deranged Fools Newsletter) in my inbox.

This little cartoon immediately put a smile on my face and reminded me of one of my favorite quotes on storytelling. A quote which, until recently, I always attributed to the manic mind of screenwriter David Milch:

Every story that works is a story of great distances and starlight which takes place in a moment of mania and is of deep delight.

Milch said this during a series of lectures on “The Idea of the Writer” which he held over the course of five days at the WGA theatre. To me this short quote collects all the pleasures of storytelling, be it as an author or listener.

Tell me a story.

In this century, and moment, of mania,
Tell me a story.

Make it a story of great distances, and starlight.

The name of the story will be Time,
But you must not pronounce its name.

Tell me a story of deep delight.

And allthough I do not see starlight just yet, this travel (from a cartoon of blogger Hugh MacLeod in 2010 to the lecture of screenwriter David Milch in 2007 to the poem of Robert Penn Warren in 1969) surely was of deep delight.