A few years back, Matthias Mader, Alexander Wuttke, Harald Schoen and I started on a project with the Konrad-Adenauer-Stiftung and the Arbeitgeberverband Gesamtmetall trying to explain public support and opposition toward the Transatlantic Trade and Investment Partnership (TTIP). While history has moved on since then, the project proved interesting. In our first publication based on this project Context-driven attitude formation: the difference between supporting free trade in the abstract and supporting specific trade agreements [Open Access] in the Review of International Political Economy, we show that Germans were thinking of TTIP as something distinct from free trade. 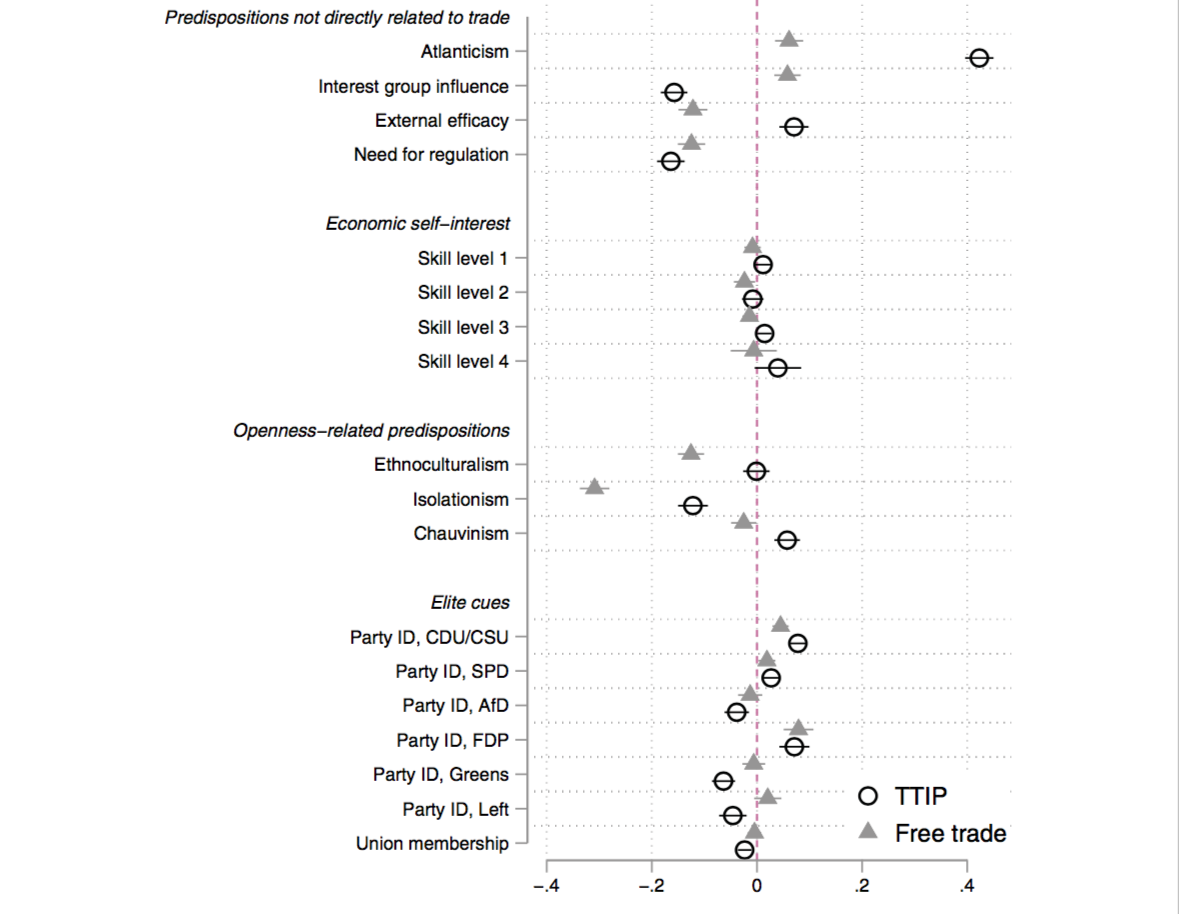 Determinants of attitudes toward free trade and TTIP. Reported are OLS coefficients and 95% confi- dence intervals from the regression models reported in Table 4, columns 5 and 6.

We find little correlation between supporting free trade in the abstract and supporting a specific trade agreement, TTIP. Factors usually identified in political economy as driving public support for trade agreements (i.e. economic self-interest or predispositions supporting openness of societies) do tell us little about public support or opposition toward TTIP. Instead, we show that in order to explain attitudes toward TTIP, you have to account for factors dominant in public discourse at the time (e.g. attitudes toward the partner country USA, the role of interest groups in politics, and market regulation).

To us, the lesson is that in order to understand public support or opposition toward specific trade agreements, we have to move away from models using a fixed set of explanatory variables toward models that are more flexible and reactive to public discourse. Models traditionally used to understand preferences for or against international integration in the abstract might thus tell us little about support or opposition toward specific instances of these measures once they are politicized and subjects of public discourse. If we ignore this, we run the risk of misunderstanding public reactions toward specific instances of international integration. Measures taken by decision makers based on these misunderstandings might then lead to unintended outcomes.

Abstract: Many studies use the same factors to explain attitudes toward specific trade agreements and attitudes toward the principle of free trade and thus treat both objects as interchangeable. Contemporary trade agreements, however, often reach beyond trade in the narrow sense. Consequently, factors unrelated to free trade may affect citizens’ evaluations of these agreements. We propose a model of attitude formation toward specific trade agreements that includes the societal context as a constitutive feature. We expect salient aspects of an agreement to activate corresponding predispositions. Empirically, we compare how this contextual model and a standard model perform in explaining German citizens’ attitudes toward free trade and the Transatlantic Trade and Investment Partnership (TTIP). The results show that the standard model performs well in explaining public opinion on the principle of free trade but is less useful in explaining attitudes toward TTIP. The latter were driven by postures toward transatlantic cooperation, predispositions toward the role of interest groups in politics, and market regulation – aspects salient in German public discourse about TTIP. In sum, we find ample evidence for the need to differentiate between the two attitude objects and for our contextual model of attitude formation.