The last stop of my upcoming US trip will be San Francisco. There I will present a paper on the possibilities of predicting German elections based on Twitter chatter at this years at the workshop Politics, Elections and Data – PLEAD2013 during this years Conference on Information and Knowledge Management (CIKM 2013). The organisers, Ingmar Weber [@ingmarweber], Ana-Maria Popescu [@hintikka] and Marco Pennacchiotti [@zagarolo] have put an exciting program together so I am looking very much forward to the workshop and the following discussion. 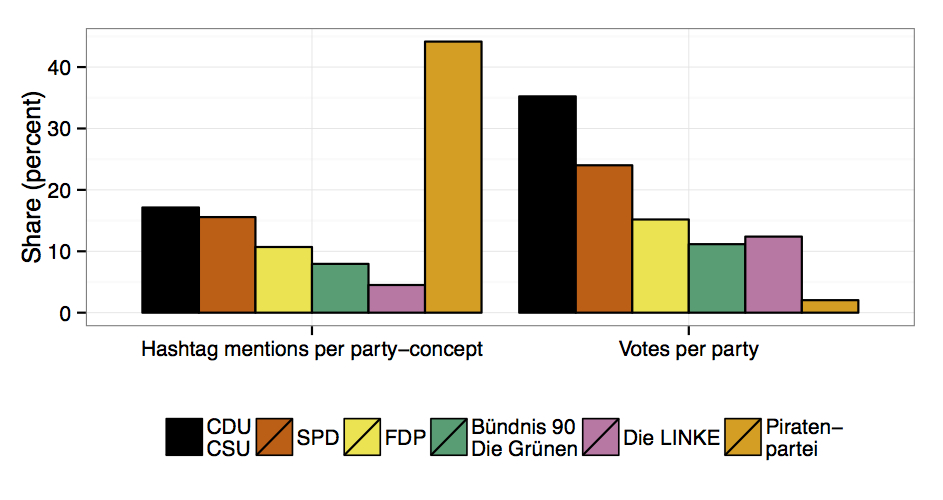 Here is the abstract to the paper.

Tweets and Votes, a Special Relationship: The 2009 Federal Election in Germany

As the microblogging service Twitter becomes an increasingly popular tool for politicians and general users to comment on and discuss politics, researchers increasingly turn to the relationship between tweets mentioning parties or candidates and their respective electoral fortunes. This paper offers a detailed analysis of Twitter messages posted during the run-up to the 2009 federal election in Germany and their relationship to the electoral fortunes of Germany’s parties and candidates. This analysis will focus on four metrics for measuring the attention on parties and candidates on Twitter and the relationship to their respective vote share. The metrics discussed here are: the total number of hashtags mentioning a given political party; the dynamics between explicitly positive or explicitly negative mentions of a given political party; the total number of hashtags mentioning one of the leading candidates, Angela Merkel (CDU) or Frank-Walter Steinmeier (SPD); and the total number of users who used hashtags mentioning a given party or candidate. The results will show that during the campaign of 2009 Twitter messages commenting on parties and candidates showed little, if any, systematic relationship with subsequent votes on election day. In the discussion of the results, I will raise a number of issues that researchers interested in predicting elections with Twitter will have to address to advance the state of the literature.

[Preprint: Tweets and Votes, a Special Relationship: The 2009 Federal Election in Germany]