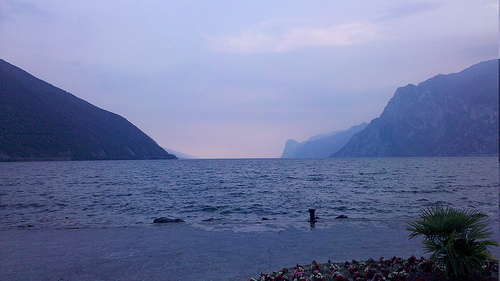 I went to Riva to present a paper, which I cowrote with Pascal Jürgens, during the “Collective Action and Social Movements” track organized by David Tindall and Mario Diani. The paper was called “Just a conversation like any other? A network analysis of digital activism in the German Twittersphere”. In this paper we examined the network structures of three different #networks on Twitter. More on that paper at a later point.

For one, the keynote of Tom Snijders, in which he gave a short “How we got here?” survey of social network analysis and its major building blocks together with his own estimation of the potential that the concept “reciprocity” might hold in future SNA research. I also enjoyed two talks by Steve Borgatti [@ittagroB] very much. In his talk “Some Thoughts on Analyzing Trajectories” Borgatti illustrated how to model social phenomena like coworking relationships of film directors or career trajectories of college coaches as directed traversals of networks. The second talk had the somewhat grandiose title “A Network Theory of Life, the Universe and Everything: A Progress Report”. In this talk Borgatti outlined his efforts to develop a more generative and integrative approach to network theory. Dawn Gilpin [@drgilpin] gave an interesting talk on her work on Twitter. In the paper “The Twitter network boost: Social amplification and attenuation of discourse in microblogging” she and her coauthors examined how contextual emotional charges influence the amplification and attenuation of online discourse on Twitter. In their presentation “Pride, Prejudice and Dynamic Triangles. Marriage Strategies within the Estate System in England at the End of the 18th Century” Jürgen Pfeffer and Betina Hollstein used the analysis of social networks to examine the social relationships in the TV version of Jane Austen’s novel “Pride and Prejudice”. Based on this they characterized different marriage strategies in late 18th century England. Finally Michael Pearson‘s talk on “Individual Profiles in Local Network Structures” gave me interesting perspectives on how to proceed with the longitudinal analysis of social networks.

In the final account: inspiring conversations, instructive paper presentations, Italian food, espresso, and a great location. What more to ask from a conference?